I worked as the health and housing beat reporter for the Daily Nebraskan during my time at the University of Nebraska- Lincoln. I went to weekly residence hall meetings and frequented the campus clinic. Both the Affordable Care Act rollout and the 2013 government shutdown happened during my time as a reporter, so I wrote quite a bit about those events.

Here are some of my favorite stories (The headlines are hyperlinked): 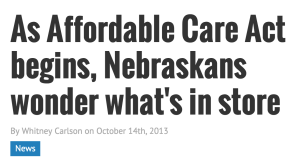 Follow whitney dawn carlson. on WordPress.com
Back to top